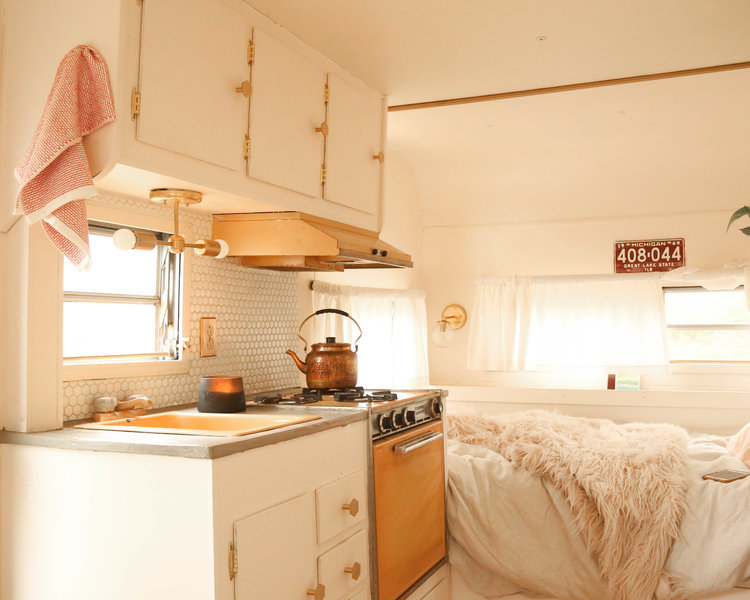 They don’t build them like they used to, eh? Rather than buying new and ready to use, some campers love to dig into DIY remodels. The result is a home away from home that’s oh-so unique.

Here’s 5 vintage campers that look better now than they ever did.

Follow Mandi in her DIY series of rebuilding (literally—she ripped the whole back wall off) a 1973 Bell Travel Trailer that she purchased on Craigslist for $1000. The original structure was built from 1×2 boards and staples, which Mandi made a whole lot more stable. She DIYed funky geometric wood flooring to go with muted but warm paint choices. Despite a few bumps in the road, there’s nothing some nice new cabinets can’t fix?

Mandi sets the bar high with this vintage trailer makeover, even painted the exterior with a cool geometric pattern, laid an exposed wood door, painted a fun design on the tabletop, added open shelving, and lots of potted plants. The final reveal even includes twinkle lights!

Laurie Jones’ family was faced with a dilemma: they desperately wanted a Lakehouse, but also had kids nearing college-age with tuition looming. They bought their 15 foot 1972 Crossroads Trailer for $1000. Laurie said it was sort of smelly, and definitely outdated.

Now, it’s a tribute to 4th of July and summertime memories that has been talked about in Country Living and Redbook Magazine. She’s decorated using America’s patriotic blue, red, and white, creating a kid-friendly space. Nothing about The Lakehouse is roughing it. In fact, Laurie openly admits that camping in her family means glamping!

Jolie Dionne walks her readers through the renovation of the Sprite on her blog, Vintage Meets Glam. Jolie and her husband bought their 1968 Sprite 400 Caravan on Kijiji for $1300. This little trailer was originally built in England, but made it’s way across the ocean to their home in New Brunswick!

Jolie shares quite a few budget-friendly tricks throughout the camper renovation series on her blog. For example, have you heard of inexpensive adhesive wall tiles, cleaning old cushions with baking soda, or marble laminate? She found some vibrant floral cushions on sale at Superstore that are a perfect fit, added a fresh coat of paint, a faux marble table top, and revealed the renovated camper only 7 months later.

At the end of the day, Jolie renovated their tiny trailer for under $1000 total—a steal when you see the photos! The cushions and exterior upgrades came in at $200 each, which was the most expensive part of this vintage reno.

A post shared by Jolie Dionne/VintageMeetsGlam (@vintagemeetsglamblog) on Apr 29, 2017 at 4:52pm PDT

Matt and Beau, the bloggers behind Probably This, bought a 1969 Globestar traveller on eBay and kept her original name: Rosie. Before getting started on the huge job at hand, these guys came up with a plan. Their master plan is now online for anyone looking into similar renovations. They give readers the tools they will need for demoing a travel trailer, and give insider info on all you should know before you start on a project of this size.

Inside, rose petal wall paper reminds this couple of their camper’s roots. New counter tops and cabinets painted white open up the small space. A local carpenter helped the couple create their DIY triangle wood floor, and the exterior paint was updated while keeping its vintage style.

Kyla and Jill sold everything they owned in 2013 to hit the road in a fixer-upper on wheels.  In 2016, they bought a 1969 Kit Companion, named it Billy, and set to work. This was their second home on the road, and they were ready for a new challenge. They bought it with some of the upgrades complete—like replaced wood that had suffered water damaged, and leak-free. They completed the rest of the aesthetic upgrades themselves.

A good camper always has a good kitchen. It’s hard to make tiny kitchens feel like home, but they work well when done right. New cabinets and countertops look fresh next to the original mustard yellow appliances. They replaced the table to allow for more space while working on the go, and DIYed the faux concrete finish with chalk and hairspray.

The final reveal showcases this trailer’s vintage vibes, but with quite a few much-needed upgrades.

*Imagery credit to Matt at “Probably This”: http://www.probablythis.com/

Getting Wild with Noah Vachon...